China: Textile industry finds it pays to be nice to workers 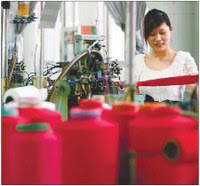 Yarn producer Bros Holding Limited, headquartered in Ningbo, Jiangsu province, has a workforce of 12,057 and last year increased its staff's monthly salary by 23 percent to exceed 2,000 yuan on average.


The figures are clearly listed in all three companies' annual corporate social responsibility (CSR) reports. By the end of June, 44 textile companies had edited and released their 2011 CSR reports, compared with 10 in 2009. Employee interests and rights protection form one of the fundamental parts of the document.


Rising wages and welfare improvements in China's textile industry are not only the norm these days. They also indicate the extent to which the nation's textile businesses, both big and small, have begun to actively shoulder their social responsibilities in terms of taking care of their employees, according to Sun Ruizhe, vice-president of the China National Textile and Apparel Council (CNTAC) and director of CNTAC's CSR office.


"Many textile businesses have realized that when implementing a CSR management system, a combination of technology upgrading, 'green' working practices, employee rights protection and shorter working hours can lead to increased productivity and efficiency," said Sun.


Zhejiang Tiansheng, one of the first Chinese textile companies to adopt a CSR management system, has released its CSR reports for three consecutive years.


Its sales surged to 9.99 billion yuan last year from 6.32 billion yuan in 2008, an annual growth rate of 26 percent. At the same time, staff enjoyed annual pay rises of 22 percent.


"We respect and take care of our employees. They feel comfortable here and work hard. As our business grows, they feel proud and want to stay," said Song Yonggen, chairman of the textile group.


The private company's labor union holds regular meetings and negotiates with executives on salaries, bonuses, working conditions and accommodation as well as the operation of a charity fund. Various cultural and sporting activities are organized to enrich employees' lives. Voluntary contributions to the communities where the company's sites are located are encouraged.


Sun's office, established in May 2005, has been engaged in formulating CSR standards and promoting their implementation in China's textile industry. The sector was the first to release an annual industry CSR report, starting in 2006. This helped the textile industry to increase efficiency, lower carbon emissions, raise incomes and improve working and living conditions.


The average annual pay rise for textile workers was more than 20 percent during the 11th Five-Year Plan period (2006-2010), higher than the approximate 15 percent in the manufacturing sector in general.


Although CSR standards have been formulated and implemented, challenges still exist for China's textile industry.


"Faced with stricter standards on the environmental fallout, energy consumption and employee rights protection globally, all our companies should speed up the establishment of a CSR system that will directly influence their business development," said CNTAC Chairman Du Yuzhou.


Some foreign companies have accused China's labor-intensive and export-oriented textile industry of being high-polluting and providing poor working conditions.


Sun said helping foreigners to appreciate the real conditions of China's textile industry and cooperating with them to combine international standards with local circumstance are urgent tasks.


The CNTAC office has organized visits by many foreign downstream companies and international organizations, such as H&M, GAP and the Organization for Economic Cooperation and Development. It also started collaborating with professional international CSR organizations, including the Foreign Trade Association - a group for European businesses that specialize in international trade issues - and the Business Social Compliance Initiative, when it first started formulating standards.


Zhu Hongren, a spokesman for the Ministry of Industry and Information Technology, said that the textile industry is taking the lead in establishing a sector-wide CSR system of standards and producing and publishing reports. Lessons learned will be introduced to the nation's other industries, with a pilot project implemented in the electronics sector soon.


"The establishment of harmonious employment relations should be the basis of any company's sustainable development. We should help businesses create a sound working environment, improve the treatment of labor and inspire employees to actively involve themselves in their company's business growth," said Zhu.