Textile Weaving in the Andes 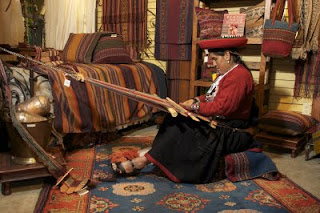 Previously, people who thought about Peru and the Andes were mainly focused on Machu Picchu but this is starting to change. Andean textiles have been hugely significant for indigenous civilizations, and now this tradition is spreading across the world.


Going back ten thousand years at least, this textile tradition was first discovered at Guitarrero, Cave, Peru which dates the origin at 8000 BCE. It began with just twinned cotton, non-loom fabric but this soon expanded to llama and alpaca wool. This has since become worldwide knowledge.


The significance to the indigenous civilizations is hard to overstate, the textile weaving that they have done has all been primarily to keep themselves clothed and warm. It was not until tourists discovered the beauty and usability of these products that this became a worldwide phenomenon.


There are many methods by which people do weave in the Andes, and many different things that they produce from it. Blankets, ponchos, hats, scarves, belts, bags, carry cloths and waistcoats are just a number of items that are created.


This weaving has become so much a part of culture that people from other countries have come to try and help it to grow. As a tourist, visiting indigenous markets is an unforgettable and must-see event. The Pisac market in Peru is one of the finest where you will so a great deals of tapestries, and other things, for sale.


It can be quite easy to dismiss the objects without realizing the quality and intricate detail of the products. Even fewer know of the history that goes with it, and how important it is for the Andean society. Fibre weavings have been integral to thee societies of the Andes ever since humans came to western South America.


The Inca Empire used it for establishing social and political distinction - an example of this would be the extravagant mummy-bundle wrappings for royalty and important village people. They were also used as rewards and gifts and, even more than that, the best weavers made tapestries that were sacrificed in Cuzco, Peru to the sun.


In many ways, textile weaving was a communication system whereby the Incas could transmit knowledge. Without the alphabet, this was imperative to maintaining the Empire. Seasonal time, mythic history and agricultural practices could be communicated and even today this is still used as showing and continuing knowledge.


On top of this, girls continue to be able to weave before puberty with any spare time that women have spent weaving. Prior to the arrival of the Spanish, it was alpaca and llama wools that were used most of the time but now it is sheep's wool most often used due to the availability and cost.


Traditionally worked alpaca wool is in great demand for sweaters, quadruple the price at home, as they are popular among foreigners traveling through Latin America. Hand woven cloth makes special gifts for friends and family, and a hanging tapestry is a beautiful reminder of the adventure abroad.